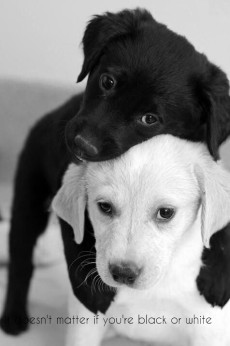 Maybe it’s just me. Maybe I expect too much. Maybe I’m too idealistic, or as my black brothers have often implied, I just don’t get it because I’m white. So I went to the local Christian bookstore to buy the White Bible.  Couldn’t find it-maybe they were just out of stock,  So I looked instead for the Black Bible. Same thing. I asked the clerk to check stock for me and she laughed at me. “I’ve never heard of the Black or White Bible”, she exclaimed. “Why would you believe there was such a thing”, she asked. “There has to be”, I replied. “We aren’t all reading the same thing”.

My heart aches over the rhetoric of hatred being spewed on both sides of the recent Ferguson shooting. I’m not shocked by the violence of those who don’t live a lifestyle of brotherly love.  Hell, cities burn when a major Sports Championship is won. What saddens me most is how some of the religious leaders have, in lieu of taking a stand against hate and reminding their congregations of the words of Christ, turned their pulpits into platforms that have only served to widen the barriers between races. Love thy neighbor, unless they are a cop, unless they have a different skin color, unless they have more money or drive a nicer car or attend the wrong church or have the wrong political sign in their yard. I’m amazed at the disclaimers we have added to God’s word because surely He must have accidentally left them out.  In many of my dialogues with my black Christian brothers, many of whom are clergy, I have been relegated to an unsympathetic and out of touch white man who couldn’t possibly understand discrimination or challenges because of the color of my skin.  There will always exist an element of racism and hatred because of sin-I can’t deny the ugly existence of racism and I would never intentionally dismiss as foolish the incidents made known to us that display blatant racist behavior. But to dismiss my concerns because I’m too white to understand is by very definition, racist. I too have had my share of issues because of the color of my skin.  While I don’t wish to draw comparisons, allow me to share some of my experiences.

I grew up on the west side of Indianapolis during the onset of bussing kids into school districts for racial balance in the 60’s and 70’s. I was always the tallest white boy in the school, so naturally I became a target to the blacks who wanted to show superiority, especially since I was, well close, to their girlfriends. On a specific day it was made known to me that I was going to “get me ass kicked” after school off premises.  I asked a few of my closer friends to have my back but all declined. True to their word I was jumped about 4 blocks from the school by a gang of black schoolmates wielding bricks, masonry blocks and belts. When the police arrived I was put into the back of the squad car because I appeared to be the aggressor.  I also took the blunt of the punishment by the school because an example of “fairness” to the entire community needed to be displayed.

In High School I was the starting center on our basketball team and third leading scorer. I lived and breathed basketball.  In my Junior year I was cut from the squad and replaced by a black student who couldn’t dribble out the side of his mouth or hit one free throw out of 20 attempts, because the Catholic school needed to show some “diversity” on the squad and to the teams we played on our schedule. I was devastated and to this day remember the feelings of being cut to make room for someone else because of skin color.

In my early adult years I had decided to pursue my dream of becoming a police officer in Indy.  The testing process was hard but I studied and passed the test with flying colors, only to be informed I wasn’t going to be accepted.  Chin up, I took the test again when open hiring was announced. Same scores, same results.  I went through this process one more time only to be told by the recruiting officer that I was wasting my time. Affirmative Action required that racial quotas be established in law enforcement departments and that I, being white, did not stand a chance of being hired as a result. Once again I was discriminated against due to my skin color-sounds familiar.

Upon moving to Las Vegas with my young family we rented an apartment on what turned out to be the wrong side of the city. We always tried to look out for our three sons.  I was informed that there was a drug pusher working the apartments giving out free drugs to kids and teens.  One day I spotted them, just feet from our oldest son and I gave chase to them, a truck load of blacks who in turn fired back at me with loaded handguns. Luckily for me their aim was much like that of many metro officers-they missed.

Most recently as a business owner in Las Vegas dealing with the largest gaming corporations in the world I was once again discriminated against in bidding on large contracts.  Seems just like I experienced in the 80’s, racial diversity needed to be displayed in vendor selection, and even though I had the best products, the best pricing and established relationships, my company was overlooked in favor of minority owned companies. I was too white.

Are these fair comparisons-maybe, maybe not.  What is common is that I was targeted because of the color of my skin and have legitimate reasons to be biased because of that discrimination.  The difference is that I have not let these incidents define me or my character.  Am I just a good Christian-hardly.  Most who know me will say I’m a gentle giant but my wife will tell you I’m an angry and impatient man with many issues. But I can’t escape my knowledge of the things written in scripture that deal with love, hate and true faith. Regardless of your individual life experiences, the Word of God is very straight forward and transparently clear when it comes to love and forgiveness:

If anyone says, “I love God,” and hates his brother, he is a liar; for he who does not love his brother whom he has seen cannot love God whom he has not seen.

Everyone who hates his brother is a murderer, and you know that no murderer has eternal life abiding in him.

“You shall not hate your brother in your heart, but you shall reason frankly with your neighbor, lest you incur sin because of him.

“But Joe, you don’t know what we’ve been through.  You can’t understand how I feel and how I’ve been wronged”.  Well maybe you are right.  All I can do is defer to Scriptures regarding forgiveness.

And whenever you stand praying, forgive, if you have anything against anyone, so that your Father also who is in heaven may forgive you your trespasses.”

But if you do not forgive others their trespasses, neither will your Father forgive your trespasses.

Then Peter came up and said to him, “Lord, how often will my brother sin against me, and I forgive him? As many as seven times?” Jesus said to him, “I do not say to you seven times, but seventy times seven.

“But I say to you who hear, Love your enemies, do good to those who hate you,

Bearing with one another and, if one has a complaint against another, forgiving each other; as the Lord has forgiven you, so you also must forgive.

“But I say to you who hear, Love your enemies, do good to those who hate you, bless those who curse you, pray for those who abuse you. To one who strikes you on the cheek, offer the other also, and from one who takes away your cloak do not withhold your tunic either. Give to everyone who begs from you, and from one who takes away your goods do not demand them back. And as you wish that others would do to you, do so to them.

Maybe my friends are right about me.  Perhaps I’m too naive in my beliefs that Christians should be the torch bearers that heal racism instead of the fuel that keeps the flames of racism burning bright. Maybe the deep seed of prejudice is just too much for the common man to overcome, even in Christ. And most assuredly there is too much water under the bridge of racism to believe that somehow some way Christians can begin to live in a Kingdom fashion while still inhabitants of earth. But of all the words that have been used to describe me, stubborn stands out.  I will continue to hope for better, pray for better, live for better and speak up for better while it is within me to do so. None of us can play God, but none of us can deny God’s words or His commands because our life experiences justify our disobedience. Christianity isn’t a black or white man’s religion, but God’s word is clearly Black and White. Peace.