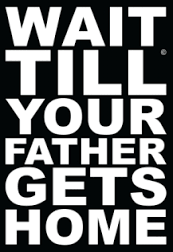 As a young boy much bigger for may age than average, there was little I was afraid of, at least from my peers. I got into very little trouble growing up. It might have been that I was in church so much there was little down time to get into any mischief. Or it may have been the one thing I did fear-those six words that evoked the fire of God whenever I heard them-“just wait until your dad gets home”. You see, at 6’8″ and 300 lbs my dad too was bigger than average! For greater impact I would hear my mom relaying the details of my latest waywardness to my dad when he called while on break, so I knew he would be planning my punishment for several hours before ha came home and played the role of disciplinarian. In every single case the wait was more dreaded and effective than the punishment.

As a believer I am grateful for a God who we can approach as Abba Father-one who is often described as loving, gracious, merciful kind, forgiving, patient-all attributes which are scriptural and true. We are told and can bet our life on the scriptures that tell us nothing can separate us from the unconditional love of God.  But, I wonder if the church, both the institutional church and the body of believers that make up the church, have so embraced the message of grace that we have completely disregarded the unchallenged sovereignty of God. We don’t want to consider the Old Testament God of jealousy , vengeance and wrath because it doesn’t fit into our 2015 definition of a more tolerant, sociable, politically correct, changing with the times God that we have created to better fit our conscious-one that allows us to fit in and be more widely accepted and considered for office, for promotion and for more likes on our social media outlets.

It’s ironic that those who oppose or deny the concept of God are first to point out accurately that God killed people in the Old testament simply because they did not follow His commands. The Mega-churches have apparently lost that section of the Bible. Don’t get me wrong-I believe that those who are looking for the truth and for eternal hope should not be scared into salvation at the thought of an angry God just for eternal insurance purposes alone. The message of the cross is one of forgiveness, of hope, of reconciliation and restoration of a sinful people to a loving, caring God whose desire is that none should perish needlessly. But to properly appreciate the loving and merciful side of God one must balance it against the judging, jealous and total rule of the same God who created a race of people to worship Him and Him alone and to fear Him who has no equals.

The stories of God’s wrath against an unruly people are too numerous to list. There were complete cities destroyed for their shameless disobedience. The armies of Israel were often decimated when they turned their backs on God.  Even Moses was prohibited from entering the Promised land because of a procedural error.  God was and is a stern God who demands fear, allegiance and obedience-nothing has changed in His expectations.  The difference today is God’s gift of His Son who took our sin punishment on the cross and acts as our advocate by covering us who accept Him with His righteousness so that the wrath of God is thwarted before being administered.

We are living in a time of great arrogance and brazen boldness as a church in general and as a nation as it relates to the issues and spiritual challenges of the day.  In order to boost attendance and keep our nonprofit status we have put forth a God who more resembles a Disney character than a God who is described in Revelation having hair white as wool and eyes blazing like fire-with feet like burning bronze and a tongue like a double edged sword. When I was younger and in church I hated always hearing sermons about hell-about how you could leave the church building and be struck by a car and enter into eternity.  The message left me uncomfortable and uneasy about the true motive for following in the path of Christ.  But the message was and is that God can’t be ignored forever just because His ways and laws are inconvenient to us or socially irrelative to the current culture.

In Him there is a life of abundance. But outside of Him, there is danger-there is peril-there is judgment. Some might ask “why would God do that” or how does a loving God allow this or that”. And my answer would be simply, I don’t always know.  He is God, I’m not. He’s in charge-I’m under His loving rule. I don’t try to argue with God.  I have many questions, but who Am I to demand answers or justification from God. I accept my role and love the promise of what is waiting.  And yes, I fear God.  Not in a panic fear but in the realization that apart from Christ, I am worthy of no less than the punishment I read about in the Old Testament.

We are living in perilous times. The Word of God is being dissected and voided of all hateful appearing verbiage. The Government is trying to tell us how we can interpret and practice our faith in complete defiance of the first Amendment to practice without interference. The entertainment, educational and political systems are lining up against the church in what will eventually play itself out as a major war for the saints that may change the face of the church as we know it now.  It is time like never before to have or develop a healthy fear of God, His word, His commands and His judgment.  The popular t-shirt is so right on-“Only God Can Judge Me”. What a horrible notion for those living in opposition to His nature and His sovereignty.

One thought on “The Healthy Fear of a Sovereign God”