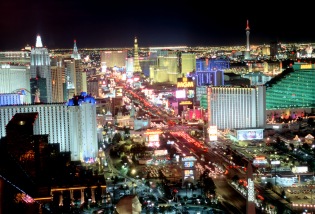 It is called by many names, the city where I reside.  It is most commonly known as Sin City. Not sure why we get that exclusive title with the implication that other cities are sin-free.  Maybe it’s that whole ‘what happens here stays here’ campaign. Some call it Lost Wages after a weekend of losing money in casinos where the House usually wins. Some know us as the City of Lights because of millions of colored lights always on display down the Strip.  Some have referred to us as the city that never sleeps, although we share that title with at least one other city.  However you refer to us, you can’t deny we are one unique metropolis known around the world as the number one party destination.

I moved here from Indiana and have been here almost twenty-two years now.  Personally I can take it or leave it.  To come for a weekend visit one can get lost in the twenty-four hour culture of lights, gaming and entertainment.  There is literally something here for everyone-yes, everyone.  If it exists, it can be purchased here.  It’s a town built as an adult playground with each property trying to outdo another to capture the tourist attention and revenue. Nothing is too big, too extravagant or too expensive here if it leads to gaming revenue.  Just consider some of these lesser known facts about Las Vegas.

*Fifteen of the world’s twenty-five largest hotels by room count are located here on the strip, and     represent 62,000 rooms.

*There are a total of well over 150,000 rooms here between the Strip and downtown Las Vegas.  On most major holidays, we are sold out!

*We have an average of over 40 million visitors come to Las Vegas annually.

*It is estimated that there are over 15,000 miles of neon tubing just on the strip.

*The beam from the Luxor is one of two man made features that can be seen from space, with over 1 million candle power light.

*The Venetian-Palazzo has over 8000 rooms alone. Yes we build it big.

Las Vegas is in the middle of nowhere, the high and dark desert.  I do have to admit that driving in to Las Vegas at night from out of town is breathtaking. We are surrounded by mountains so the two major roads leading in from the north or from the south are secluded from seeing the city until you reach the apex of the terrain.  On either of the routes at night you feel like you are driving through an eternal tunnel of darkness until you reach that point where the road clears the hills and suddenly, laid out before you is this spectacular blanket of sparkling lights that looks like Oz.  As far as the eyes can see there are lights and a glow that against the desert black night is hard to put into words.  After all these years of living here I’m still impressed when I see the lights of the city at night.  It is like strings of colored diamonds laid out on a black velvet spread.

I’m certainly not trying to impress you with our fair city-I’m laying out a backdrop for something far greater than even this for the believer. I have seen some beautiful places and visited some of God’s best works of creation.  As awestruck as I have been in these places there is coming a day when these places will be no more. Jesus, creator of our universe and all that is in it, told hid disciples “I’m going away to prepare a place for you”. We aren’t told where this new place or heaven is.  We are only given a glimpse of how spectacular our new home will be.  1 Corinthians reads this:

“It is Written that the eye has not seen and the ear has not heard, nor has it entered into the heart of man the things which God has prepared for those who love him.”

When I saw Las Vegas for the first time I could not imagine a place more spectacular.  But this city can’t compare with God’s city, our new home.  The Bible gives us some clues as to what we can expect.

Revelation 21:18-19; “The material of the wall was jasper; and the entire city was like pure gold, like clear glass.  The foundation stones of the city wall were adorned with every kind of precious stone.”

Verse 21; “And the twelve gates were twelve pearls, with each gate being made of one single pearl, and the streets of the city were pure gold, like clear glass.”

Revelation 22;1; “The angel showed me the river of the water of life, bright as crystal, flowing from the throne of God and the Lamb.” 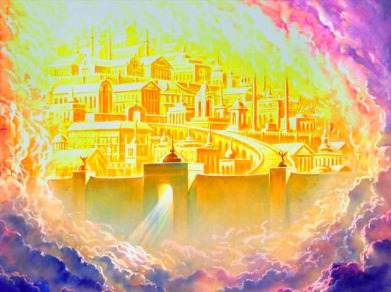 I have quite the imagination but I can’t fathom pure gold being used for building materials and paving! Nor can I fathom the size of the oyster that produced a pearl large enough to create a city gate!  The things we count as precious and valuable here in our earthly quest for riches and success and portfolio security will be common and ordinary in our new home, putting even Las Vegas to shame.  But even more spectacular than this is the promise of what life will be like.

Revelation 21;3-4; “And I heard a great voice out of Heaven saying ‘Behold the tabernacle of God is with men, and He will dwell with them and they shall be His people, and God Himself shall be with them and be their God. And God will wipe away all tears from their eyes; and their will be no more death, now any sorrow, nor crying; neither will there be any more pain, the all the former things (that we are accustomed to here on earth) will be no more.”

Now, I’m impressed! I truly believe that God never grants us complete satisfaction or contentment here on earth so that we will be constantly looking forward and yearning for that which our eyes have not seen and our ears have not heard of, but our spirits have confirmed for those who love God and live lives committed to Christ the Lamb!

There was a popular movie out years back titled Heaven Can Wait.  What a farce! I can’t wait for Heaven!